It’s not easy being green but it sure is delicious…

I wish I could tell you that I’ve always had a love for all things healthy.  I feel like it might have given me a sort of sophisticated glow, like I was ahead of the eat more kale trend. Sadly I had no clue that this leafy green even existed up until a few years ago, but these days it seems like everyone is on the bandwagon of ‘eat less crap’, or at least they masquerades that way with their smoothie bowl Instagram pics before they hit up the Golden Arches for a hash brown and egg McMuffin combo. And what is it with wanting to share what we learn, ESPECIALLY when it comes to things related to our well being, it’s kinda like a backseat driver.

A couple of years ago my boyfriend at the time, how do I put this nicely, didn’t know kale existed either or any of its brothers or sisters – ya follow me?!  Ok truth, he ate like a first year University student and frozen pizza and wine wasn’t just the menu de jour but the whole leap year.

This was pre Holistic Nutrition degree so I was still new to the whole share what you know routine and immediately thought; well if it’s good for me then it has to be good for everyone else, right?! Problem is, when you are the poster child of health and treat your body like a temple and then you take a frozen pizza-loving dude and jam supplements and kale down his throat; the results won’t always be… appreciated?

Probiotics for instance, I’ve been taking them for years now, won’t leave home without them.  Pizza man on the other hand had never heard of them but was open minded i.e.:trying to impress me with his overzealous positive attitude. So he popped some good bacteria and then carried on with his day. Fast forward to a couple hours later and we’re now 45 minutes into a walk through the woods, far from civilization and any sort of bathroom facility, see where i’m going here???

The poor guy had to  take a seat on a fallen log and let things settle down because he was worried he might poop his pants, and nobody wants to poop their pants in front of their girlfriend. Pretty sure I may have peed mine from laughing so hard.  We both finished the day learning something new: Probiotics are not for the faint of heart, especially when the words good gut bacteria aren’t already in your vocabulary.

So next time you think, I want my boyfriend to be a bit healthier, maybe try some kale pesto instead. 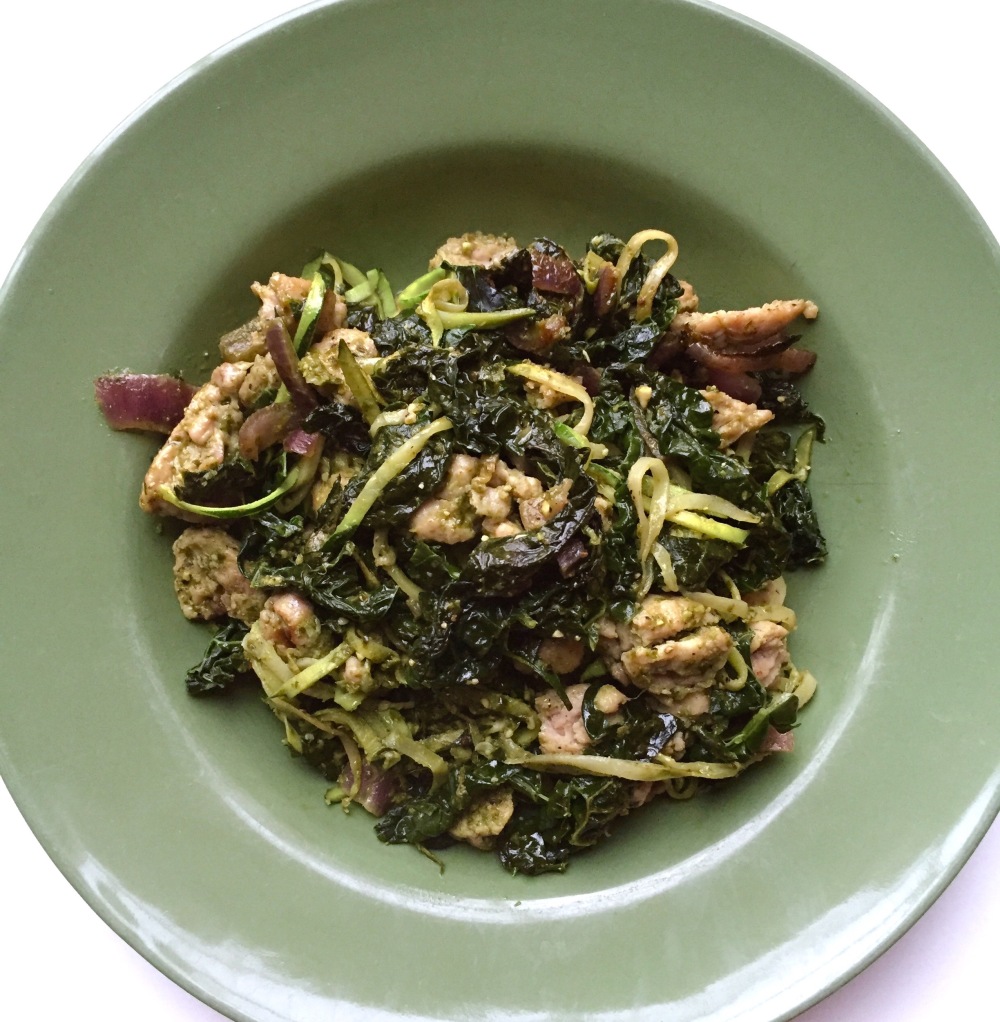 In a large pan start cooking your turkey sausage over medium heat. You can either squeeze it out of the casing like I did or leave it whole then chop it up later.

Next toss in your red onion and kale then cover the pan and then let them do their thing for about 8-10 minutes. The longer you cook your kale the softer it will be.

Once your turkey sausage seems pretty much cooked and your kale is a nice rich tasty green, in the zucchini noodles go with the pesto and then cover your pan again for about 3-5 minutes.

The zucchini noodles don’t take that long to cook plus I like mine a little on the a la dente side.

And yes you can make your own pesto but sometimes isn’t it nice when someone else does some of the hard work for you?!?!