Confession… I have this thing that I do with recipes, especially the ones full of sugar, butter, and that is I try and put a “healthy” spin on them. Cut out the processed crap and toss in some good love instead. But in my recent efforts I have had some pretty EPIC fails. Like the time I decided that pastry didn’t need that much butter, so I halved the amount and ended up with an inedible container in which the pumpkin just sat. Or there was that time I forgot to add the sugar in the recipe I was making (in my defence I was distracted by my whole family trying to talk to me mid bake) so our thanksgiving dinner was followed by a second dinner. Nothing like a big slice of savoury pumpkin pie.

But then I started to notice a common theme… all of these epic fails were pumpkin recipes. C’mon pumpkin, why can’t we all just get along?!?

But I am happy to say that this recipe combo, healthy spins and all, is probably one of my favourite things to eat. Breakfast, lunch, dinner, dessert, slathered with almond butter.

(I’ve used both and they are equally delicious)

You could also swap out the nuts and raisins for some dark chocolate.

In a large mixing bowl throw everything in except the walnuts, raisins, and eggs. Use a hand mixer and whip it up good. I find with GF baking if you want whatever it is you’re making to rise then a hand mixer is your friend.

Now in a smaller bowl you’re going to whip up your eggs just enough so that you get a bit of air into them, this will also help your pumpkin bread rise. Toss your eggs into your pumpkin mixture and then blend those two together for just another second or two to fully combine. Now you can add in the walnuts and the raisins and with a spoon stir everything together.

Scoop the batter into a greased loaf pan and top with sweetener of choice, I like to top mine with a little more cinnamon before I bake it, because you can never have too much cinnamon…

Bake for about 45 – 50 minutes or until a knife when put into the centre of the bread comes out clean. 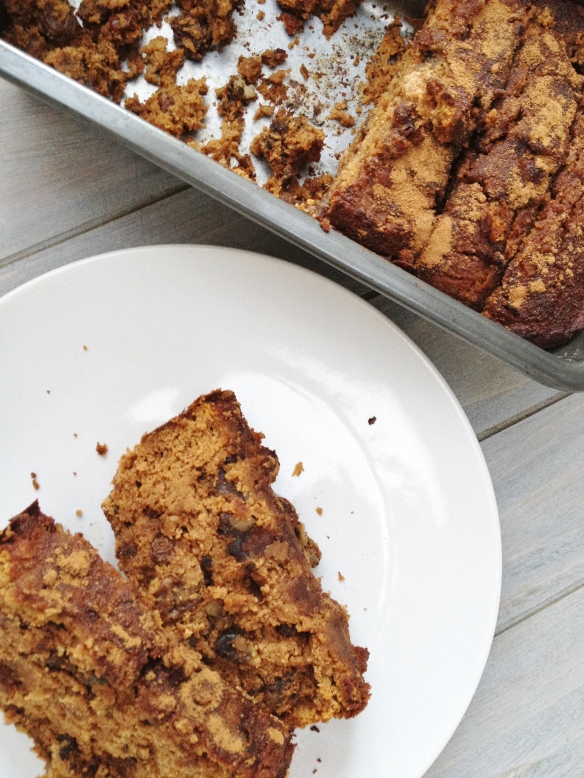